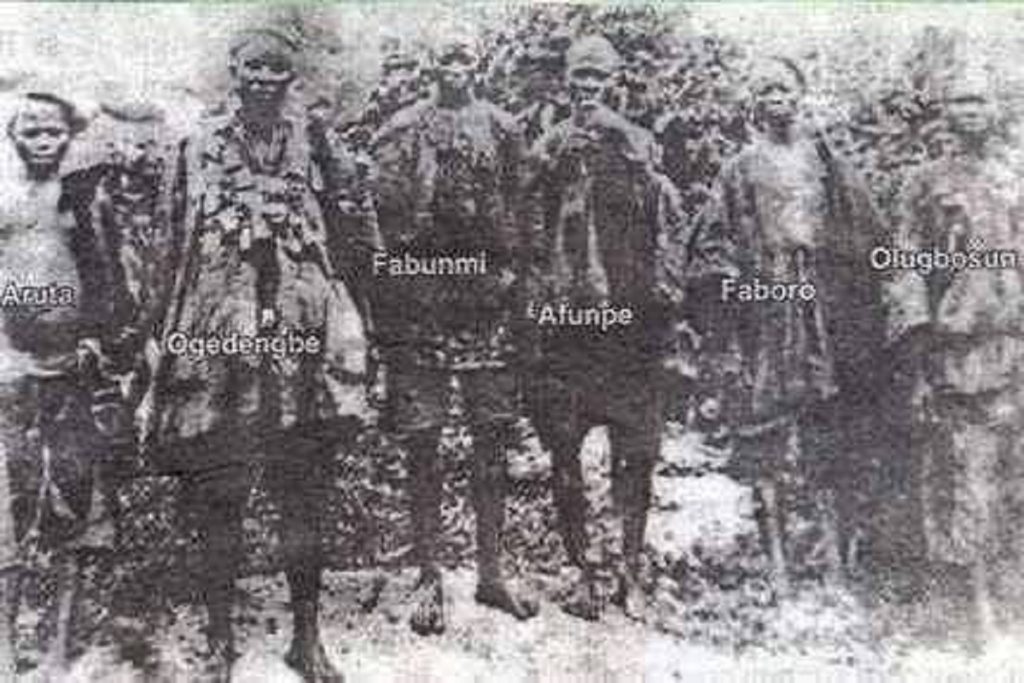 Of mainly Western Yoruba and its Allies (Ibadan and its allies) and its Eastern Yoruba (Ijesha) Ekiti andThe Igbomina Countries) The main action of the war took place in the North-East.

It was a war that put an end to all manners of wars and semblance of war in Yorubaland.

Indeed, it was a war for supremacy between Ilesha, Ekiti, Igbomina and Ibadan. It started on 30th July 1877 In the beginning of the nineteenth century, the old Oyo Empire which was on the verge of decay.

Eventually collapsed under the onslaught of the Muslim Fulani Emirate established at Ilorin.

The collapse of Oyo by the Fulani raised the question of providing an effective Check to any further encroachment by the Fulani on Yoruba territories and maintaining peace and stability in the region.

The solution to these problems were however, found in the Oyo Yoruba who had regrouped themselves in Oyo, Ibadan and Ijaiye.

Since the New Oyo could not provide the required security for the land, this responsibility therefore fell on Ibadan and Ijaiye.

Ibadan was given the task of defending the Eastern parts of the Yorubaland.

With this arrangement, Ibadan found itself the main bulwark against further progress of the Fulani. The defeat of Ilorin at Osogbo as early as 1840 checked further encroachment of the Ilorin to the South.

Ilorin did not as a result of this defeat put an end to their aggression, they turned their attention to the Eastern part of the country.

Thus bringing them into conflict with Igbomina and Ekiti countries.

Ilorin’s attack on Ekiti town of Otun precipitated an outbreak of hostilities between Ilorin and Ibadan.

The conquest of this area, called for a systematic administrative control. The answer to this problem war found in the system of This administration called the Ajele system.

The Ibadan Ajele system of administration showed some weaknesses.

On the whole, it was an oppressive system, most of the Ajele behaved irresponsibly, treated the subject People cruelly and corruptly enriched themselves.

The tributes and services demanded by Ibadan were crushing.

The Ekiti revolted violently against Ibadan’s Ajele, murdered many of them and declared their independence. The Ekiti then became the nucleus of an anti-Ibadan alliance.

Ilorin gave its support to the Ekiti.

Ibadan proved its worth in tits first encounter against Ekiti at the Jalumi battle near Ikirun in 1878.

Ibadan inflicted heavy loses on Ekiti forces. The Ekiti were bloodied but they did not break.

Ogedengbe who had his own grievances against Ibadan brought his forces to join Ekiti and to lead them and Ijesha in what became a formal confederacy, that is, the Ekiti Parapo.

The Ekiti were then supported by other enemies of Namely Ilorin, Yagba, Akoko, the Egba and the Ijebu.

The last two had a score to settle with Ibadan.

Ibadan had always wanted a direct route to Lagos while on the other hand, the Egba and the Ijebu sought to preserve their monopoly as middlemen. Furthermore, they were determined to prevent the already formidable military power of Ibadan from increasing through direct access to the supply of arms from the coast.

The Alaafin had since the destruction of Ijaye also become an enemy of Ibadan.

Thus, Ibadan was faced with A combination of other Yoruba states.

The Ekiti and their allies pitched their camp at Imesi-Ipole and Ibadan forces confronted them from their base at Igbajo.

After the initial indecisive fighting, the war dragged on till 1882, Ife came out openly against Ibadan and attacked Ibadan supporter, Modakeke, but was repulsed.

Modakeke aided by Ibadan then captured and destroyed Ife.

In 1883, exhausted by the fightings, parties sought an end to the war.

In 1886, Moloney, the Governor of Lagos sent delegations one under Rev. Samuel Johnson and the Other under Rev. C. Phillips to settle the disputes which were still ranging in the interior.

They succeeded in arranging a ceasefire between Ekiti Parapo and Ibadan and later between the other opposing camps.

The various groups then sent representatives to a meeting in Lagos where a peace treaty was signed.

Covering most of Yoruba land but excluding Abeokuta and Ilorin which had refused to participate in the negotiations.

Certain issues were solved by the treaty while others remained unsolved.

By this treaty, Ibadan became independent of While the various members of the Ekiti Parapo also gained their independence.

The demand of Ife that Modakeke be removed or destroyed was difficult to implement.

The wars led to the emergence of a new type of leaders in Yoruba land.

These included able men like Oluyole of Ibadan, Sodeke of Egba, Kurumi, Ogunmola, Latosa and Ogedengbe.

Confronted with the problem of how to organise new states and other political entity.

The Yoruba tried other new systems of government and these were typified by Ibadan’s republicanism Ijaye’s military dictatorship and Abeokuta’s federalism and the Ekiti Confederacy.

The wars directly or indirectly provided the British with the opportunity to occupy Yoruba land.